So, here it is! My first post of the year.

2016 threw its doors open. I ran in, grateful for the new start, and am now standing, slightly disillusioned, in it’s shabby blue hallway.

The Classic to kick off 2016 is Goblin Market, chosen by my beloved Grandma (affectionately dubbed ‘Silver Spice’ since I was a sprog, as she was such a cool Grandma that she could be the sixth member of the Spice Girls). You might remember I visited her in Plymouth back when I read The Voyage of Sir Francis Drake.

This is not my first time reading Goblin Market. In my second year of uni, I read the poem for a Womens Writing module, having first fallen in love with Rossetti’s poetry as a teen. Most probably feeling worse for wear from a devastating cold or self-inflicted misery, I just couldn’t fathom the narrative poem.

Two friends and I were late for the Goblin Market lecture, which was based in a  particularly poky classroom. We arrived two minutes after the lecturer, a dishevelled man in his late thirties. He had shoulder length hair, a beanie permanently pinned to his head, plaid shirts and cable knit cardigans galore. The girls on my course fancied him, alarmingly, as the one eligible male member of the English faculty.

We rushed into the room, where the front three desks directly under the lecturer’s nose were the only unoccupied seats. We shuffled in, plonking our bags on the desks and removing our coats while the lecturer fussed over the projector screen, flustered and fraught.

When ready, he patted down his body, unable to locate his lecture notes. It was the most disjointed lecture, the six slides on the projector screen failing to trigger his memory and offering no illumination to the thirty students.

If possible, the little I had garnered from reading the poem prior to the lecture trickled away as I sat there, listening to his confused ramblings.

“I just wish I had my notes!” he howled  every five minutes, apologising profusely.

As the lecture came to a close, I put my coat back on, exchanging raised eyebrows with my friends, and picked up my bag, under which I discovered HIS NOTES.

I felt so guilty. I ruined that entire room’s understanding of the poem, and made a brilliant literary man question his own mind.

I considered harbouring them all to myself for about 30 seconds, but the notes were a tangle of nonsense. Much like if you were to read my notebook for this blog – they make sense to no-one but me.

The guilty feeling soon returned and so I simply binned them, never choosing the text for any essay or exam as self-punishment.

As a result, I approached this Little Black Classic with some trepidation.

Goblin Market is reminiscent of a Grimm fairy tale. On the surface, it appears to be a fable-like story for children. But it’s riddled with dark complexities and tensions bubble beneath the surface. It’s a strange mix of being both sentimental and sweet, and slightly uncomfortable.

These goblin men offer countless tempting fruits – from apples and oranges, peaches and raspberries, to mulberries and pomegranates, damsons and dewberries.

Lizzie warns Laura “Their evil gifts would harm us.” She reminds Laura of a girl called Jeanie, who ate the goblin fruits. Jeanie sought the goblins out but could never find them again and was driven mad. She, “Who should have been a bride,” was driven to an early grave, so consumed with desire.

Laura doesn’t listen to her sensible sister, and pays for the goblin fruits with a precious golden curl from her head. She gorges on the treasure trove of fruits. She “never tasted tasted such before” and “sucked until her lips were sore.”

Like Jeanie, Laura can’t find the goblin men again, wanting to take Lizzie to experience their delicious fruits. So the two sisters go about their domestic lives.

“They lay down in their curtained bed: / Like two blossoms on one stem”

They milked the cows, baked, churned butter, sewed. But

“one content, one sick in part; / One Warbling for the mere bright day’s delight, / One longing for the night.”

Lizzie can’t bear to see her sister pine for the fruits, and watches her fade away, like an addict. Laura even stops carrying out her domestic duties, she’s so consumed with desire.

Wanting to see her sister happy, Lizzie goes in search of the goblin men on Laura’s behalf. She soon finds them (or they find her) but they don’t allow her to take the fruits away. They insist she eats there with them but she is defiant.

What follows is an attack. They force their fruits on her. They elbow, jostle, bark, tear, soil, stamp, pinch, kick, maul and mock. There’s no getting away from the fact that it’s rape-like.

She refuses to open her lips. She sacrifices herself and her own purity for her sister and, when the goblin men finally tire and abandon her, she loyally runs home to Laura.

And so, in a particularly homoerotic scene, Laura eats the fruits from Lizzie’s body. She passes out and her sister lovingly revives her back to health.

When they grow up and have children of their own, the both warn their daughters of the goblin men.

I loved this poem. I can’t understand why I didn’t enjoy it at university. It has so much drama, and two different but flawed women at it’s core.

I couldn’t help but think of my own sister, who is my most loyal friend. You might remember her from The Beautifull Cassandra, when I wrote of our comparison to the Dashwood sisters.

This was made all the more real this week with Alan Rickman’s sad passing, which both Katy and I were devastated by. He was our Colonel Brandon! I’ve been in Sense and Sensibility mode ever since, and the devotion of the sisters in Goblin Market reminds me of the Dashwoods. Katy is the Lizzie to my Laura, the Elinor to my Marianne!

I can remember one slide from that disastrous lecture. It showed an artwork by Dante Rossetti, the pre-Raphaelite artist and Christina’s brother, in which the two sisters lie  innocently together, sleeping, and was created for the poem’s original publication.

I set upon seeing this in the flesh, so to speak, which seemed even more appropriate as my sister is an art historian (see my Circles of Hell post).

I made my way to the British Library, my first trip to an academic setting setting since university. (Have no fear, library users, I frequent local libraries). 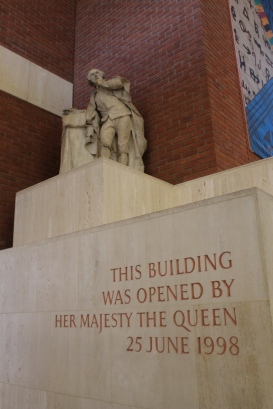 It was incredibly exciting. I love visiting the British Library for exhibitions anyway, but stepping into a reading room, lined with hard-working students, and great volumes of brilliance, was thrilling. I collected a small maroon box, and headed to my chosen seat. 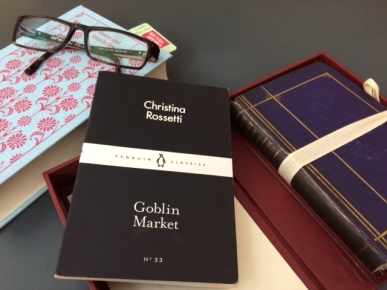 nside, a delicate book of leaves was tied with a bow, like an ageing gift. I carefully untied the ribbon, and opening the crackling cover to reveal this… 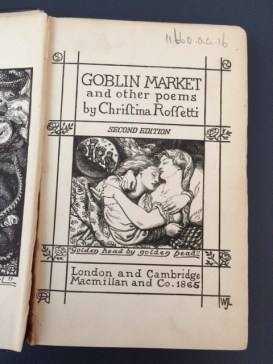 It was beautiful, and utterly thrilling to hold a second edition of the poem. The artwork is abundantly pre-Raphaelite. Look at their hair, their fairy-tale serenity. Beautiful!

My friend Lois and I then headed to the Alice in Wonderland display, currently showing at the British Library, where the Rossettis were mentioned several times.  Did you know that Lewis Carroll was friends with the Rossettis, and mirrored Dante’s style when drawing his own Alice, or that Christina’s book ‘Speaking Likenesses’ is an imitation of Carroll’s Alice stories, in which little girls are rewarded and punished depending on their behaviour…?

I finally feel strangely rewarded after hiding those lecture notes!

Thank you so much for choosing this poem, Silver Spice! I don’t think you could have picked a better Classic for your Granddaughter, and her sister.

Next time I will be blogging about H.G. Wells’ A Slip under the Microscope. 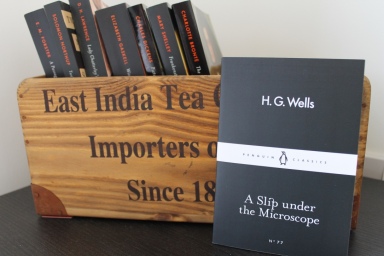